“Do you have a song that you want to sing to Lulu?” Alice asked. I could hear Elliot and Penny jabbering excitedly in the background. I was calling to ask Alice a question about coordinating upcoming travel, but it was a Saturday afternoon, and her two kids were sitting on her lap watching Frozen when the phone rang. Elliot seized the receiver almost immediately to declare, “Lulu, you’re MY Lulu!” I could feel my face cracking as a smile spread across my lips, crinkling the corners of my eyes and lifting all the little muscles of my brow. It was as if, with those words, not only my countenance but my very center changed, and a warmth and light broke through my rough surface, the way red-hot magma bubbles up through new fissures in hardened igneous rock.

“You’re my one and only Elliot!” I exclaimed, grateful that I didn’t know any other Elliots, and I could make such a bold proclamation with full honesty. There was some more fumbling as the phone was passed, and then the clear voice of two-year-old Penny came through.

Her rendition of the signature Disney song left us all laughing. Finally, once Elliot and Penny could think of nothing more to tell me about their Christmas visit from Santa, Alice and I were able to spend more time catching up. Among various other topics, we chatted about our days in college, thinking ahead to our upcoming reunion in June. As we reminisced and exchanged news of mutual friends, I recalled some of my actions of which I was less than proud. “If I could do it again, I would do it so differently!” Alice exclaimed.

“I don’t know,” I replied. “I don’t think I would be who I am now if I didn’t go through it the way that I did. I think I would need to do it the same way again.”

When I consider who I was during college, I think of a girl who was hot-headed, self-righteous, brilliant but amazingly egotistical and arrogant… a girl who lived in nearly constant shame and mortification, who was never good enough, who was an outsider, and who hated herself with an intensity that could crack a diamond. My self-perception now is radically different. I would like to think that I am intelligent, but certainly not brilliant. I am less reactive, and I am less controlled by my emotions, which (I think) are also less fiery and extreme. I hope that I am growing in humility. I know that I am more empathetic and compassionate than I once was. A compassionate heart and a more open mind is a strange gift that my prolonged illness and my eating disorder bestowed on me. Thankfully, with therapy and medication, I am not nearly as depressed as I once was. I hope that I am not the same person I was in college, but I think that I needed her experiences. I needed to feel the effects of her decisions and the way that she lived her life.

Reflecting on the conversation the next day, I was overwhelmed with gratitude that this dear friend remained so dear. I was also mindful that I was not entirely mindful during our conversation. As we started to talk, I was thumbing through my email, but once I found myself asking her to repeat a comment she made not two minutes earlier, I realized that my attention was divided, and I was able to put aside my distractions. However, that didn’t stop me from painting my nails twenty minutes later.

In the midst criticizing myself (“What part of ONE THING AT A TIME is so difficult?!” I was thinking), when it occurred to me that I internalized every word that Alice spoke. With a pen and my journal, I breezed through our 55 minute dialogue, which rambled and ranged over work, family, holidays, weddings, children, friends, the past, the present, and the future. I WAS engaged. Perhaps painting my nails was almost reflexive, like picking at a stain on the tablecloth. In an unusual turn, I decided to let go of my self-criticism, accept Saturday’s behavior during my conversation with my friend for what it was, and move onward. “I wasn’t necessarily unaware,” I concluded. “But,” I continued, “maybe I can keep this experience in mind the next time I am trying to hold a meaningful conversation with someone over the phone, and I will be a little more mindfully aware.”

“If there are people you haven’t forgiven, you’re not going to really awaken. You have to let go.”

Self-forgiveness is hard for me. It is even difficult for me to forgive myself for struggling with self-forgiveness. Forgiveness, in general, is always a challenge, but when it comes to forgiving myself, there is part of me that still couples forgiveness with forgetting. I worry that if I let go of my guilt, shame, blame, or culpability, then I won’t be able to move forward. I will be destined to repeat the same mistakes again and again. It remains somewhat counter-intuitive to me that the way forward is to let go, yet when I am able to discard the weight of those dragging thoughts and burdensome emotions, my heart seems to blossom, and I feel more open and malleable. I don’t expect that my weaknesses will suddenly mend or that I will overcome my chronic problems by forgiving myself, as if I could simply kick aside or step around those personality traits and maladaptive patterns that remain my frequent stumbling blocks. No. I think that I will continue to repeat similar patterns as I work toward progressive change. Slowly. Bit by bit. With lots of trips, falls, and scraped knees along the way. However, the wounds will heal, and often the scabs fall away without even leaving a scar. There will be deeper cuts that may continue to ache, and the skin that grows over the gash will be a bit thinner and a bit shinier than what was there before. But… to not forgive would be to continue poking myself, over and over again, in those same spots.

One of the items on my long-term “to do” list was “clean out old clothes.” When I returned from partial hospitalization last January, I was quick to bag up armloads of pants, too-tight shirts, and belts that I associated with too many past behaviors or in which I simply could not feel at ease anymore. My philosophy was, “I’m starting over. If it doesn’t fit or if it isn’t 100% comfortable, it goes.” I dropped off a few garbage bags stuffed with clothes, both old and new, at my local church. However, there were a dozen or so pairs of slacks that went into a box, and there was a rack of dresses in my closet that I didn’t touch. I purchased just a few essential wardrobe elements to get me through the winter. I was still left with many articles of clothing that didn’t trigger a strong emotional reaction, but I found that I wasn’t wearing many of them. Gradually, I added a t-shirt here, a sweater there, and eventually, even a skinny pair of jeans. Every once in a while, I would glance over my drawers and pull out a few more items to donate. Yet, I knew that another thorough overhaul was probably in order.

What possessed me to root through the hangars on the morning of Martin Luther King, Jr. Day, I’m not sure. That is exactly what happened, though. I thought that it would be a time-consuming and onerous process of trying things on and debating what to keep and what to give away, but when it came down to the actual doing, I felt surprisingly free. I found that I didn’t care if these clothes fit. Pulling down that last box of pants from its shelf after clinging to it for over a year, I was surprised by my detachment. I didn’t want them. Once, I was convicted that I would somehow “reclaim” each pair and learn to wear them again, but on that Monday morning, as bright sunlight streamed through the frigid air outside, I didn’t need to reclaim anything. I just wanted… to let go. I piled the dresses that were hanging untouched in their plastic drycleaner bags into a heap on my bed. I hesitated for a moment, because some of my cocktail gowns were quite lovely, and the sheaths and pullovers were versatile classics. Finally, though, it didn’t matter if they were still in style, if they were too tight or too loose, if they might fit again with a little fabric taken up here or let out there.

“One of the most courageous decisions you’ll ever make is to finally let go of what is hurting your heart and soul.” 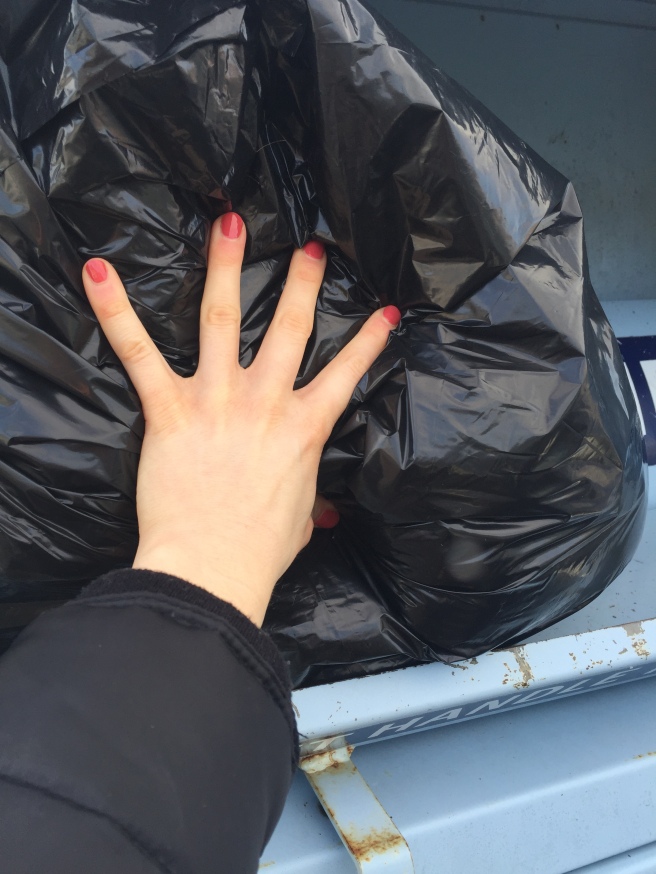 Holding onto my eating disorder, to worries about weight and appearance, and to my fears about food is draining. It saps my mental, physical, and emotional energy. I am not where I once was, though neither am I where I’d like to be. What else am I holding onto? I have a sense that there is much more that I could let go of; the only question is… will I?

What about you? Are you holding onto anything that you don’t need anymore? At what costs to yourself?

“Did I offer peace today? Did I bring a smile to someone’s face? Did I say words of healing? Did I let go of my anger and resentment? Did I forgive? Did I love? These are the real questions. I must trust that the little bit of love that I sow now will bear many fruits, here in this world and the life to come.”

4 thoughts on “The Shedding”

Follow The Real Adventures of Becoming (whatever this thing is that I am presuming is the authentic and genuine) Me on WordPress.com

A Scattering of Categories